How I got rid of step by step test cases

User Stories and how I use them to test

Getting rid of step by step test cases didn’t happen overnight. Initially we replaced regression test cases and test cases for new features with user stories that have acceptance criteria. The key to using a user story to cover both requirements and testing is to make sure that the acceptance criteria cover all test scenarios. Often product owners and/or business analysts only cover typical scenarios. It’s the tester's role to uncover edge cases and negative scenarios. If your user story covers these, then it can be used as both a requirement to develop the feature and to test the feature once it’s developed, and there is one source of truth.

Most people will be familiar with the user story format “AS A … I WANT TO …. SO THAT ….But the real meat of a user story is the acceptance criteria. Again people have different ways of specifying these. The format I prefer is the Gherkin one: GIVEN … WHEN … THEN
How does this work in practice? We now use Jira to manage software development and to write both user and technical stories. The simplest way to show which acceptance criteria have been tested is to add another column to the acceptance criteria and tick off as you test.

Here is a real life example of the user story:
AS A dispatcher I WANT the ability to send an SOS message to a field engineer SO THAT I can alert them of an emergency 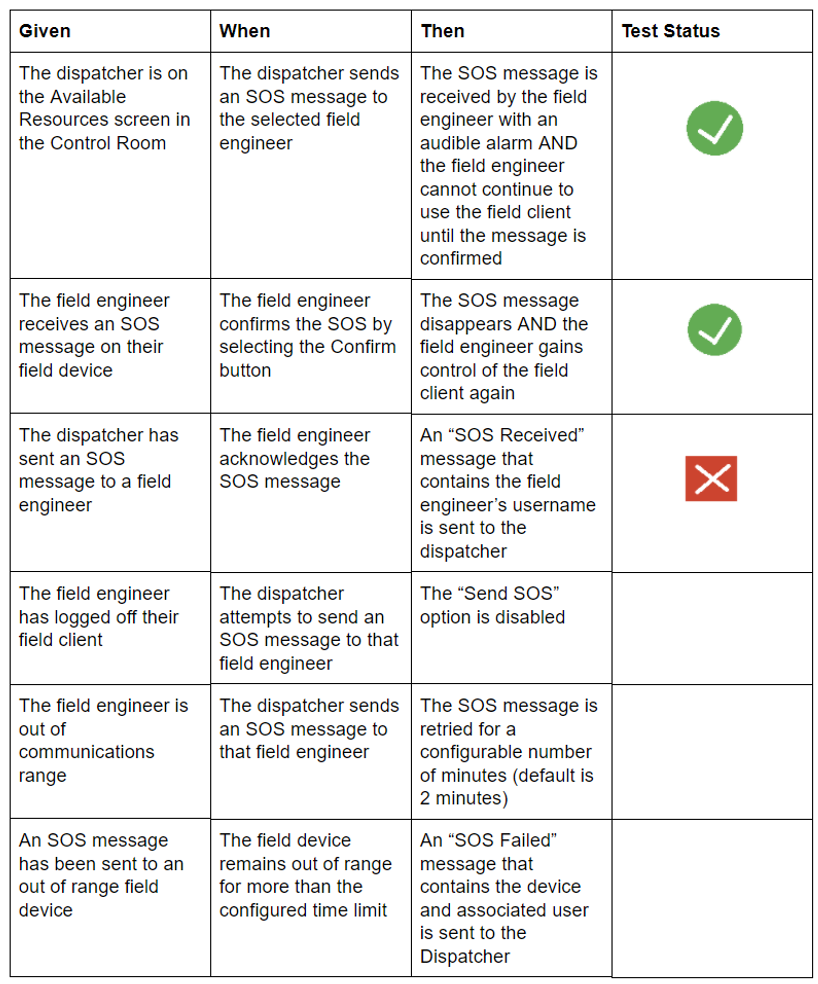 As you can see, the the first three acceptance criteria specify typical scenarios, while the last three specify edge cases and negative scenarios. It’s important to capture all the scenarios if you want to use user stories for testing.

Because we test directly with the user stories they always reflect the current state of the product, and the business and developers alike have found them to be a valuable snapshot of how the product works. It would be difficult to wade through reams of step by step test cases but user stories are much more accessible to other parts of the team. In addition, overall maintenance costs are much reduced as we do not need to maintain a separate set of regression step by step test cases.

Other Types of Testing

Once we had moved to a more agile way of testing that was based on user stories I made a list of the other types of testing that we do. Once I did that I realised that we didn’t need step by step test cases for any of them.

Let’s have a look at these other types of testing:
Shakedown testing - we have a need to do a formal shakedown prior to releasing to customers and also for new internal releases. These were written up as step by step test cases in Test Track and I was keen to get rid of them. I had already been using mind maps for exploratory testing and it occurred to me that mind maps would be suitable for defining a shakedown test as well. Here is an example: 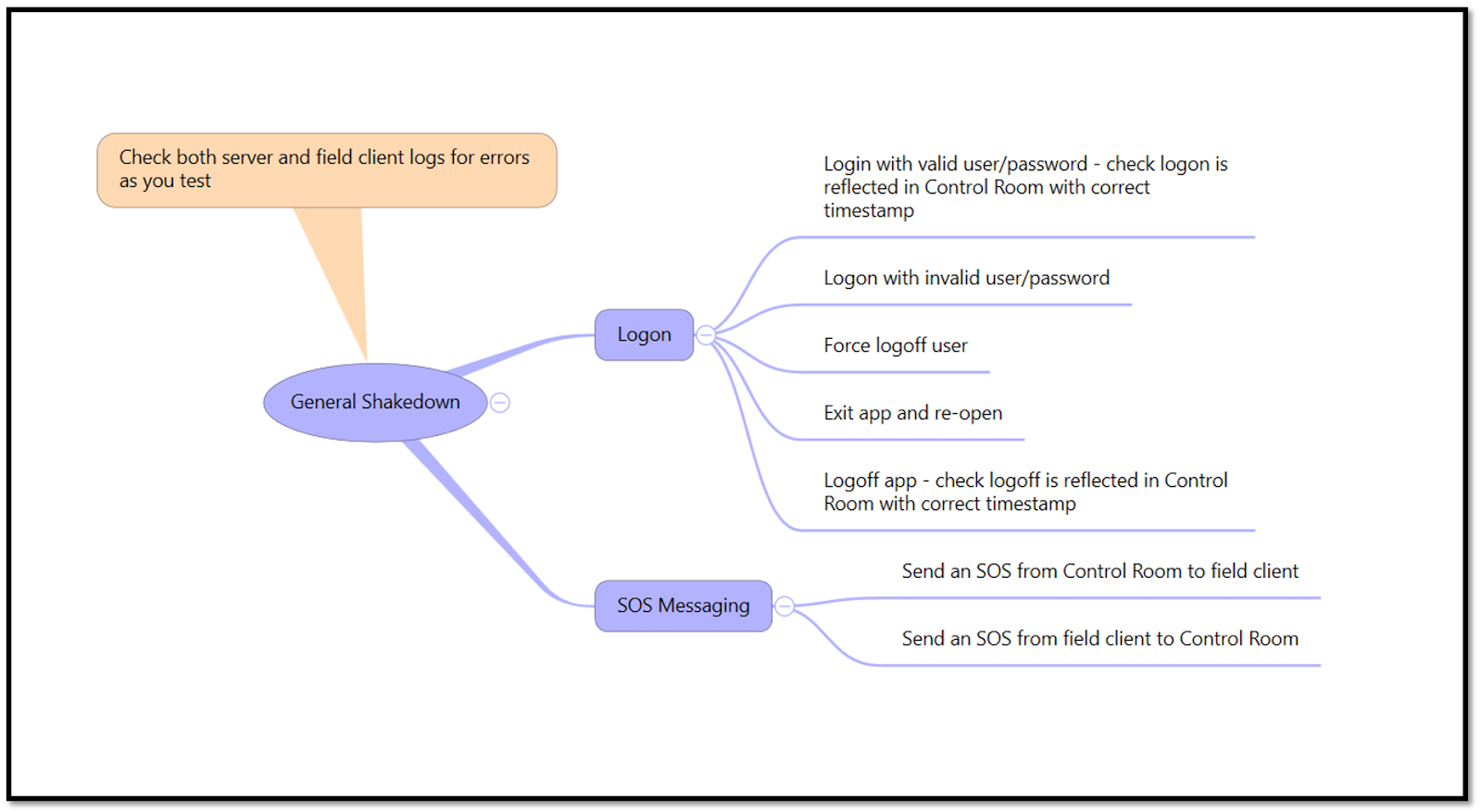 We use a mind map tool called iThoughts (by Toketaware) but there are lots of other tools available.

In practice these work well but they assume the tester has a good knowledge of the system as there isn’t a lot of detail. It’s a similar case for user stories. For this approach to work you need intelligent testers who understand the system under test well.

Performance and load testing - done on an ad-hoc basis. These are now automated tests that are stored in source control.

Mobile OS version testing - because we develop Windows, iOS and Android apps we need to check that the apps still work correctly when there are new mobile OS versions. These are similar to the shakedown tests and we also use mind maps.

So if I list out all the types of testing that we do you can see that none of them actually requires step by step test cases:

This also means that no test management or ALM tool is required.

At the moment we use a set of product user stories to regression test the product but ideally regression testing would be automated as much as possible. See my blog post Let's stop writing automated end to end tests through the GUI for my thoughts on that. Over time, I want to get to the point where we only use the user stories for new product features and regression testing is handled by a combination of automated tests, shakedowns and exploratory testing.

Moving to this style of testing has meant that we are now much more efficient:

December 08, 2019
In this post I'll describe how to actually get test versions of the app onto a device. But first let's discuss whether you should test on an actual device or on an emulator. An emulator is a desktop application that mimics the hardware and OS of a mobile device. The developers will generally do their app development on an emulator and you can use them for early stage testing but when it comes to meaningful end to end testing, a device is a must have. There is no other way to get a feel for the performance of the app and how users will use it real life.
Of course you will probably need to test on multiple devices as they vary not only by OS (iOS and Android) but also OS version, device make (e.g. Samsung or Motorola), and screen size. We also now have a new OS for iPads called iPadOS. In a future blog post I'll look at device fragmentation and how to handle it.
For now let's assume you are only testing on one iOS device and one Android device. Your developers have de…
Post a Comment
Read more

November 20, 2019
You all no doubt own a mobile phone, most likely an iOS or Android device, so you probably think it wouldn't be too difficult to test mobile apps. While the principles of testing remain the same, there are significant differences between how you test websites and mobile apps. For example: You can't just open a browser on your laptop to test the latest version of the application. Somehow you need to get the latest version of the app onto your test device.iOS and Android have completely different design patterns.It's more difficult to get under the hood of an app to see what's going on. You can't just open Chrome DevTools.
This is the first in a series of posts where I'll give you some background on how to test mobile apps and include a number of tips and tricks that I've learnt the hard way in my 10 years of mobile testing experience. I'll focus on iOS and Android since those are the most common apps but I also test Windows apps.…
1 comment
Read more