You all no doubt own a mobile phone, most likely an iOS or Android device, so you probably think it wouldn't be too difficult to test mobile apps. While the principles of testing remain the same, there are significant differences between how you test websites and mobile apps. For example:

This is the first in a series of posts where I'll give you some background on how to test mobile apps and include a number of tips and tricks that I've learnt the hard way in my 10 years of mobile testing experience. I'll focus on iOS and Android since those are the most common apps but I also test Windows apps. Note that I'm only considering how to test native apps and not web apps. Native apps are the apps that you install directly onto your mobile device from the Apple App Store or Google Play Store. Web apps are essentially websites that are accessed via the device's browser.

One of the first things to understand is that iOS and Android operate using different design patterns which determine button look and feel and where menus are placed. For example, traditionally Android has placed navigation menus at the top of the screen while iOS has tabs at the bottom of the screen. Also visual components such as check boxes, lists etc have their own styles. 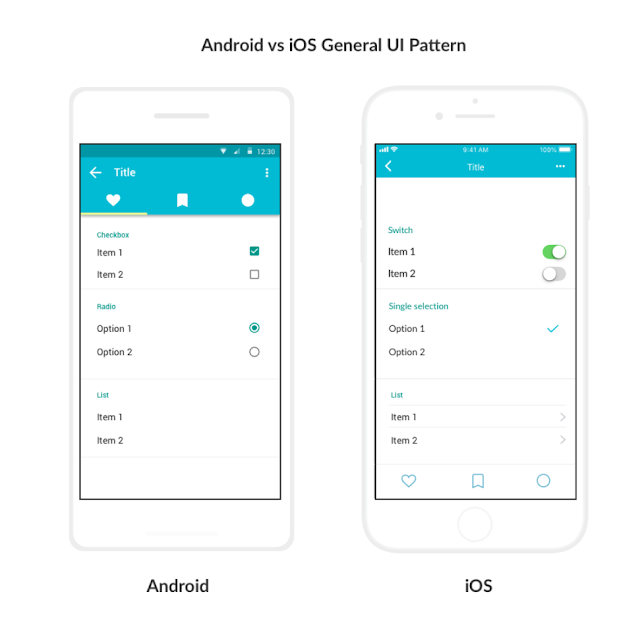 There are also significant differences between iOS and Android in how you navigate. For example, iOS has no hardware back button but Android users use them all the time. In iOS you would swipe left to get a menu whereas in Android you would do a long press. You probably use one of those as your personal phone and would therefore be comfortable with that navigation pattern so when you are asked to test the other OS you will need to understand that pattern as well.

For a long time it was important to adhere to design patterns for each OS so that people who use the app can use familiar navigation patterns. However, in the last couple of years, the trend has been to move to a more uniform UX design especially if you are developing an app for both the iOS and Android platforms. So it is worth checking with your UX designers on what approach they have taken. The UX design approach will also affect how the app is developed. If you are developing separate native apps then you generally stick to the established OS design patterns but if you are using a platform approach such as Xamarin.Forms then the design would be more uniform.

The apps that I test are developed using Xamarin.Forms. It is a toolkit used for cross-platform mobile app development and runs on the .NET framework. It allows developers to create application code that is shared across Android, iOS, and Windows Phone. While the codebase is shared, it still allows OS specific customisation and produces native iOS, Android and UWP apps.

You need to establish what design decisions have been made before you plan your testing.

Most companies produce apps for both iOS and Android so you need to make sure that the developers are adhering to the relevant OS design pattern. For example, how does the app handle moving back up the stack? In Android, you would use the hardware back button but in iOS you need a software back button to return to a screen.

You might find these articles on creating and designing iOS and Android apps interesting:
https://en.yeeply.com/blog/creating-apps-differences-android-ios/
https://medium.muz.li/differences-between-designing-native-ios-apps-and-native-android-apps-e71256dfa1ca

In my next blog post I'll go into detail on how you test a mobile app. Firstly, how do you install a test app onto a device and how do you access files on a device.

December 08, 2019
In this post I'll describe how to actually get test versions of the app onto a device. But first let's discuss whether you should test on an actual device or on an emulator. An emulator is a desktop application that mimics the hardware and OS of a mobile device. The developers will generally do their app development on an emulator and you can use them for early stage testing but when it comes to meaningful end to end testing, a device is a must have. There is no other way to get a feel for the performance of the app and how users will use it real life.
Of course you will probably need to test on multiple devices as they vary not only by OS (iOS and Android) but also OS version, device make (e.g. Samsung or Motorola), and screen size. We also now have a new OS for iPads called iPadOS. In a future blog post I'll look at device fragmentation and how to handle it.
For now let's assume you are only testing on one iOS device and one Android device. Your developers have de…
Post a Comment
Read more